History of the Sacred Heart Sisters

Delegates of 10th General Chapter of Sisters of the Sacred Heart.
Sister Crescence is in the second row in the aqua-colored cardigan.

SISTERS OF THE SACRED HEART is an indigenous congregation established by a Belgian Jesuit priest, the Rev. Bishop Louis Vanhoeck, in 1926 at Bettiah, Bihar. The condition of the village women and children was pathetic due to recurrent diseases like plague and cholera, the strong caste system, superstitious beliefs, and the existence of a feudal society. The Bishop, deeply moved by the deplorable state of affairs, was motivated to form a congregation of Indian Sisters who had the knowledge and the understanding of the local traditions, culture and language.

As such, the Bishop identified nine local candidates who were formally accepted as postulants for the new Congregation of the Sisters of the Sacred Heart. Initially the newly formed congregation was under the management and control of—and worked for the mission of—the Sisters of Mercy of the Holy Cross, a Swiss order who had been working in Northern Bihar since 1894. The Holy Cross Superior was also Superior General of the Sacred Heart congregation.

Since the work of the Sacred Heart Sisters was to go into the villages for the development of the women and children, the Holy Cross Sisters considered them subordinates. The chosen candidates were poorly educated, and since the village work did not require higher education, the Holy Cross sisters had little respect for them, treated them poorly and a great amount of discrimination existed.

Even the appointment in 1953 of the first Vicar General for the Sacred Heart congregation had no management control for the attitude of the Holy Cross Sisters. This continued until 1969, when the Sisters of the Sacred Heart took the first step toward independence and their new Superior General was elected.

The first term was initially for three years and deemed an observation period. The powers were still in the hands of the Sisters of the Holy Cross. In 1972 the Superior General was reelected, and from then on the congregation was given the power to make its own decisions.

The SSH congregation had been providing basic education for its Sisters, but for a long time they were unable to attract candidates with a higher education. Most had a nursing or teaching background.

Until 1972 the Sacred Heart congregation did not even have a home in the capital city of Bihar, where the Diocesan Administration was headquartered. Sisters who came to the Bishop's House for any purpose were as vagabonds without proper shelter; most of the time they were asked to share with other congregations and were not properly treated.

As the Diocesan indigenous congregation, the Sacred Heart Sisters work mainly at various parishes in the works of education, health and social work and charitable/relief operations. The sisters get the honorarium which varies from place to place, or diocese to diocese, and also according to the works which are assigned. The maximum honorarium for the sisters involved in the pastoral works of the diocese is Rs. 1,000/- per month and no other expenses are provided as a policy of the diocese. The honorarium for the social works and education ranges from Rs. 1,500/- to Rs. 2,500/- only. The details of the congregational centers are as follows:

The mission of the Sisters of Sacred Heart is to organize and strengthen unprivileged rural people so as to [help in] achieving sustainable social and economic development and strive for a just and equitable society.

Objectives of the Congregation: 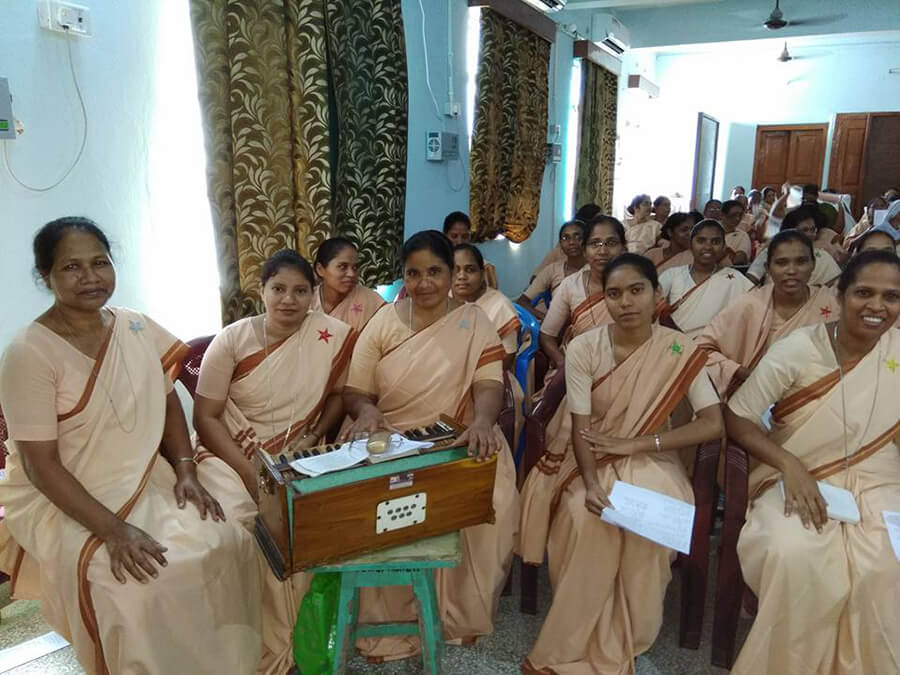 A group of Sacred Heart Sisters in 2019

FAKIRANA SISTERS SOCIETY is a secular, non-political, non-profit making voluntary organization registered under Society Registration Act of 1860 in the year 1956 Registration no 43 of 1956-57 dated 19-12-1956. A governing body that comprises of the Sisters of Sacred Heart is the governing body of the organization. The organization is working in Health, Education and Social Development with the help of its member sisters, executives, workers and volunteers in both the urban and rural areas having institutional base (branches) spread all over India.

Goal of the organization

The Goal of the organization is to promote love, equality, peace and justice i.e. creative and constructive among all with special emphasis on women, poor, destitute, marginalized and the downtrodden. It is also envisaged that the fruits of development should reach the un-reached through the community convergence and social action.

Vision of the Organization

The vision of the Fakirana Sisters Society (FSS) is the development of the most unprivileged section of the society through social action. It also emphasizes in the development of the poorest of the poor with the utilization of the existing resources available at the disposal of the community and making the community to take their own initiatives. The organization believes in that ‘God helps those who help themselves.’

Mission of the Organization

The mission of the FSS is to organize and strengthen rural people with an emphasis on women, so as to enable them to take social actions for achieving sustainable social and economic development and strives for a just and equitable society.